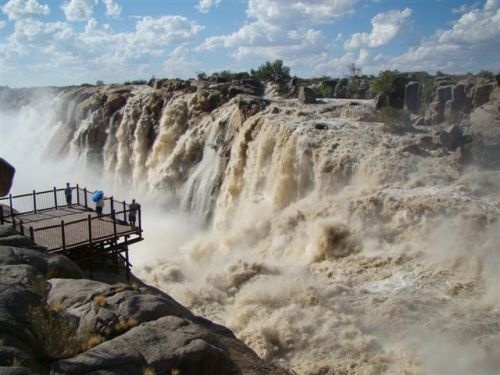 Established in 1966, Augrabies Falls National Park is remarkably one of South Africa’s most spectacular and oldest protected areas. This park extends up to 500 square kilometers and conserves parts where the Orange River changes from wide, slow flowing River crossing the sandy soils to fast flowing River which cuts via ancient granites. When the River is filled with floods especially from February to April the waterfalls turns to be more stunning with vigorous roar thus the name Aukoerebis which denotes place of great noise. The eastern side of this park features the Orange River that makes up a system of tiny interconnected channels prior cascading over Augrabies waterfalls about 90 meters high.

It is believed to be one of the 5 massive waterfalls in the world. The downstream from these waterfalls the River flows via a narrow strikingly stunning 18 meter gorge. Augrabies National Park’s vegetation is characterized by arid like environment featuring mainly succulents, aloes and acacias as well as the shepherd’s tree, wild tamarisk and the Namaqua fig. The other most spectacular feature of this protected area includes the Kokerboom trees that are usually thrive around the hills. Its wildlife species comprise of about 46 mammal species, 186 species of birds and several reptiles.

The notable wildlife species include the yellow mongooses, slender mongooses and rock dassies that take the advantage of the little shade especially the fallen trees, rock crevices, burrows and many more. Huge numbers of cape clawless otters also thrive within this park which indicates that the River ecosystem is relatively healthy. Large mammals include the gemsbok, kudus, eland, Hartmann’s mountain zebra, springbok, steenbok and others. The giraffe that lives in this park is believed to be lighter in color than those in other areas. The notable antelope that is found in Augrabies National Park is the klipspringer, pairs of which are usually sighted bounding across the rocks by keen eyed walkers.

The major mammal predators include the caracals, bat eared foxes, African wild cats, leopards, black backed jackals and others. The incredible reptiles include the Bradley’s flat lizard also locally called the Augrabies flat lizard and it is one of the endemic species in the area. It only lives within this area and approximately 100 kilometers of the falls which also rewards you with dramatic views of the waterfalls. The bird species at Augrabies National Park include the black storks, verreaux’s eagles that both breed in the protected area as well as the pygmy falcons.

There are also pale chanting goshawks and many others. The geology of Augrabies is amazing and comprises of ancient granite rocks most of which indicate various ways where they have been weathered. Some of the few most spectacular one include the large whalebacks that rise above the landscape and are gradually being worn down by chemical weathering, sheering off huge thin slabs of rock.

If you are planning for your next vacation to South Africa, do not miss to pay a visit to Augrabies National Park as it rewards visitors with lots of safari activities for you to enjoy. They include walking/hiking-the simple walks are conducted in most of the waterfall viewpoints that are next to the restaurant complex. There are also several wooden walkways that connect to various most scenic areas.

To explore more about the park’s rare environment and sceneries, the longer five kilometer Dassie trail is remarkably the best option for you. It is a circular trail that begins at the rest camp and allows you to explore the stunning gorge, several tiny tributaries and some spectacular viewing areas prior your return time. If you wish to explore the park in depth then you will need more time to explore the 40 kilometer klipspringer hiking trail which may take you about 3 days and 2 nights a fact that it winds down from the plateau into the gorge.

The 2 nights are spent in the spectacular cabins. This strenuous African hike may require you to book for it early enough as it only opens during the cooler months from April to September. You can even drive through the park especially using your 2 or 4 wheel drive safari car. Exploring the Augrabies falls-this park is situated within the remote area, Northern Cape. It is interesting for you to undertake a self drive tour to the Kgalagardi Transfrontier Park and it makes a good stopover for those of you who are heading to Kgalagardi, Namaqualand, Cape Town and Cedarburg Mountains. Other exciting activities for you to participate at this park include night drives where you will spot out most of the nocturnal wildlife species; mountain biking and bird watching.

The nearest main town to this park is Upington which is located approximately 140 kilometers about one and half hours’ drive away from Augrabies Falls National Park. There is a nearby Falls Guesthouse that you can spend a night in while on your vacation in this park. Other accommodation options include the Augrabies Falls Rest Camp.

In conclusion, Augrabies Falls National Park is truly a hidden gem in South Africa that you should consider a must to include in your bucket. Visit this park and you will be amazed by variety of rare attractions and fascinating activities.