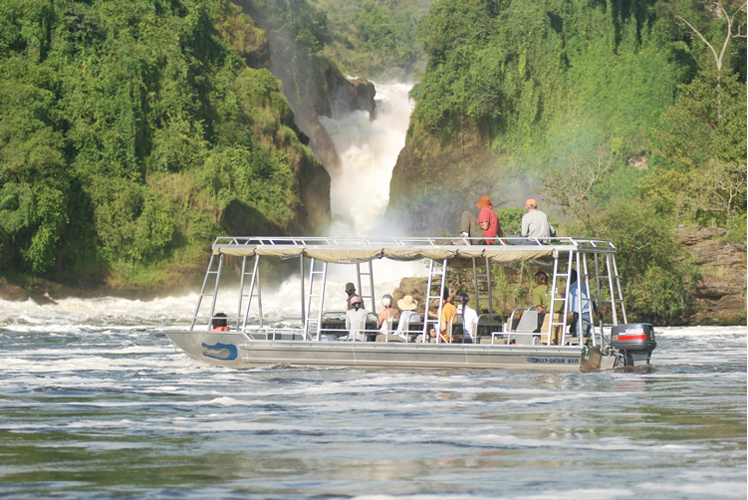 The 3480 square kilometer Murchison Falls National Park (largest Conservation Area in the country) not only offers over 76 species of mammals and around 450 species of birds but also offers opportunities of engaging in launch trips upstream from Paraa thus presenting a remarkable display of attractions that culminates with outstanding views of the Murchison Falls.

River Nile, Africa’s longest River bisects the Murchison Falls National Park for a distance of approximately 115 kilometers as it makes it way from Lake Victoria to the Mediterranean Sea in the extreme North, a journey that makes it the second longest River in the whole World. Not only that, this River transverses in the Park thus presenting an ideal chance for enjoying the adventurous Launch cruise when you visit Murchison falls National Park in Uganda.  The stretch of Nile River is serene with it flowing in its mature stages fronted by Mahogany trees, Borassus palms and Acacia wood species among others. Did you know that Murchison is actually the most powerful waterfalls in the whole World? Additionally, the boat downstream to the Victoria Nile Delta extending to the shores of Lake Albert.

Boat cruise was also conducted in 1959 by the Queen Mother of England who was then inaugurating the new Launch and it has always become the most adventurous and interesting activity any tourist to the Park or Uganda in general ever participated in.

This adventurous and refreshing activity always departs twice a day-at 9am and 2pm daily and lasts from two to three hours. Are you looking forward to spotting numerous aquatic species during your safari in Murchison Falls National Park? Then participate in a launch trip where you will spot more than 100 species of aquatic birds such as the elusive shoebill storks, pink backed pelicans, Malachite and Pied Kingfishers, Piac-piac, African fish eagles, African Jacana, Goliath herons, Great white Pelicans, African skimmer, Black Crakes, Long tailed Cormorants, Yellow-billed storks, Great Cormorants, and Saddle-billed storks among others. The recommended time for sighting the birds is the morning cruise downstream to the Nile-Lake Albert Delta thus offering the perfect chance of seeing the shoebill storks.

Normally the return trip takes in a variety of wildlife species especially Nile Crocodiles, Hippos, buffaloes, Elephants, antelopes such as Uganda Kobs, waterbucks as well as occasionally the giraffes and Hippos among others that are always at the banks drinking water. The serene sundowner boat cruise from 5:00pm provides the phenomenal view of an equatorial sunset reflected on the River. As earlier mentioned, the launch trip from Paraa jetty departs at 9am and 2pm daily but offers outstanding views of Wildlife and bird species before culminating with unforgettable frontal view of the breathtaking Murchison Falls.

The Uganda Wildlife Authority (UWA) boat or launch cruise has for long been operated along the waters of Nile River by a team of experienced guides and by the time you finish the activity, you will agree that it’s the most exciting and worthwhile. On top of the launch cruise conducted by UWA, other private boats also exist on the Nile River at Paraa Jetty and hired even from some of the Safari Lodges.

Besides the Murchison Falls National Park, tourists visiting Uganda during safaris can enjoy boat cruises within Lake Mburo National Park, the Kazinga Channel within Queen Elizabeth National Park as well as other Lakes such as Bunyonyi, Victoria and Albert among others.