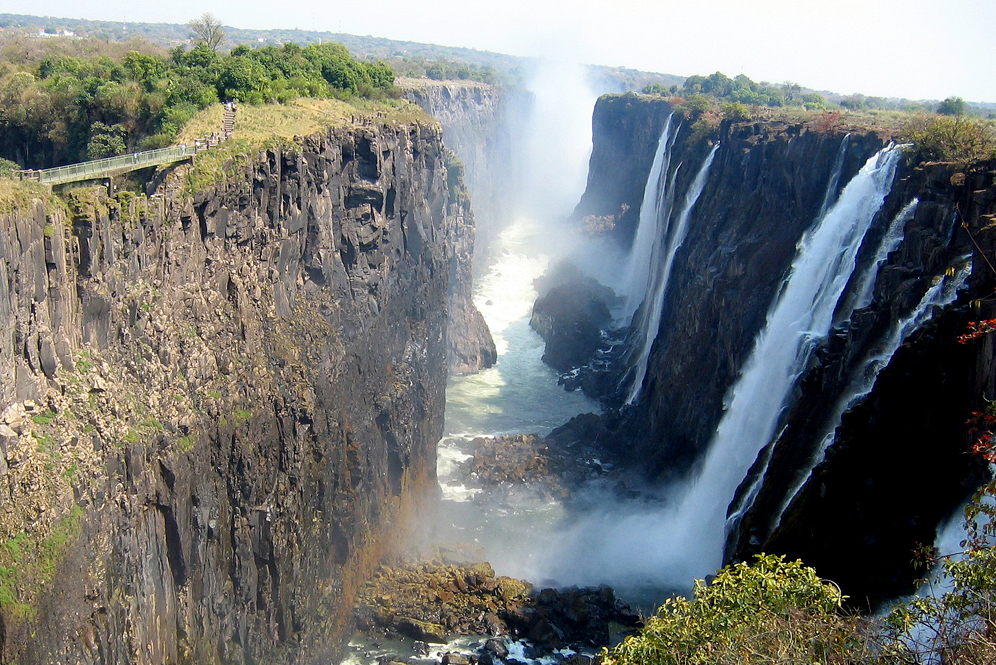 If you are planning to pay a visit to Southern Africa, Zambia or Zimbabwe this coming season, the splendid Victoria fall is that one major tourist site you need to explore. Best described as The Smoke that Thunders, this beautiful waterfall lies in the Southern Africa just along River Zambezi between Zimbabwe and Zambia border area.

The riverine forest together with the palm trees thrive along the banks and islands upstream the waterfalls. Mostly, the rainforest comes with plants which are unique and they include among others the ivory palm, wild date palms, pod mahogany, ebony as well as batoko plum, creepers and lianas. These protected areas feature vast number of wildlife species such as antelope families, buffaloes, giraffe, Grant’s zebra, elephants, leopards, the South African cheetahs, Vervet monkeys, baboons while on the river above the Victoria falls comprises of crocodiles, hippos as well as African bush elephants which wonder across the river during the dry spell. There are also lizards, honey badgers, klip springers, clawless otters as well as bird species like peregrine falcon, taita falcon, black eagle, herons, fish eagles, Augur buzzard and several of the water fowl. The river also contains over 40 fish species below and 89 above.

This natural wonder features both the highest and widest on earth and remarkably the largest with over 1708 meters wide and 108 meters high. Its height is twice that of Niagara waterfalls in North America and its width is equally twice that of the Horseshoe waterfalls. The Zambezi River flows over a level sheet of Basalt in shallow valley and bounded by low and distant sandstone hills. Its river course is dotted with many trees especially in most of its islands that are large in number as River reaches the waterfalls. This area has no mountains, escarpments or even deep valleys but mostly flat plateau that cover hundreds of kilometers. This waterfall is believed to have been first viewed by David Livingstone around 1855 where it is currently named the Livingstone Island which is one of the 2 land masses within the river.

Victoria waterfalls formed due to full width of the River plummets in a single vertical drop into a traverse chasm and depth of the chasm known as the First Gorge that also differs from 80 meters in the west and 108 meters at the end. The outlet to First Gorge is 110 meters and the river empties its water into this waterfalls. Two islands exist in this waterfalls’ crest and they include Boaruka Island also known as Cataract Island which is close at the western bank and the other Livingstone Island which is in the middle the area where David Livingstone is believed to have first discovered this water body. River Zambezi experiences its wet season from November to April and the dry spell in other months. It tends to floods from February to May while its peak is around April and the spray from Victoria waterfalls increases to about 400 meters high and at times twice as high and can be sighted. When the dry spell takes course, most of the islets along the crest become wider and larger and from September to January, about half of the rocky face of this waterfall also become dry as well as the bottom of the First Gorge. Besides, there are several archaeological sites around this waterfall that feature the early Stone Age, oldwan tools, sangoan tools and Lupemban artifacts of middle Stone Age.

What to do in Victoria waterfalls?

The fact that this waterfall is one of the spectacular tourist attractions, there are many activities to be done by visitors on safari in Africa. They include among others white water rafting, bungee jumping, sunset cruise, bike tours, gorge swing, adrenaline hire wire, micro light flights and many more.

Getting to the Victoria waterfalls

This waterfall can be reached on the Zimbabwe part. You can also reach to this natural wonder by plane and interestingly, there are airports around the Victoria waterfalls on Zimbabwe part and Livingstone which is town on Zambian part and frequent flights are conducted especially in Cape Town, Nairobi and many more. Besides, you can use bus and head to Livingstone from Windhoek with Intercape. There are 3 weekly buses cross to Katima Mulilo border area. There is also train which rewards with the most scenic views along the way.