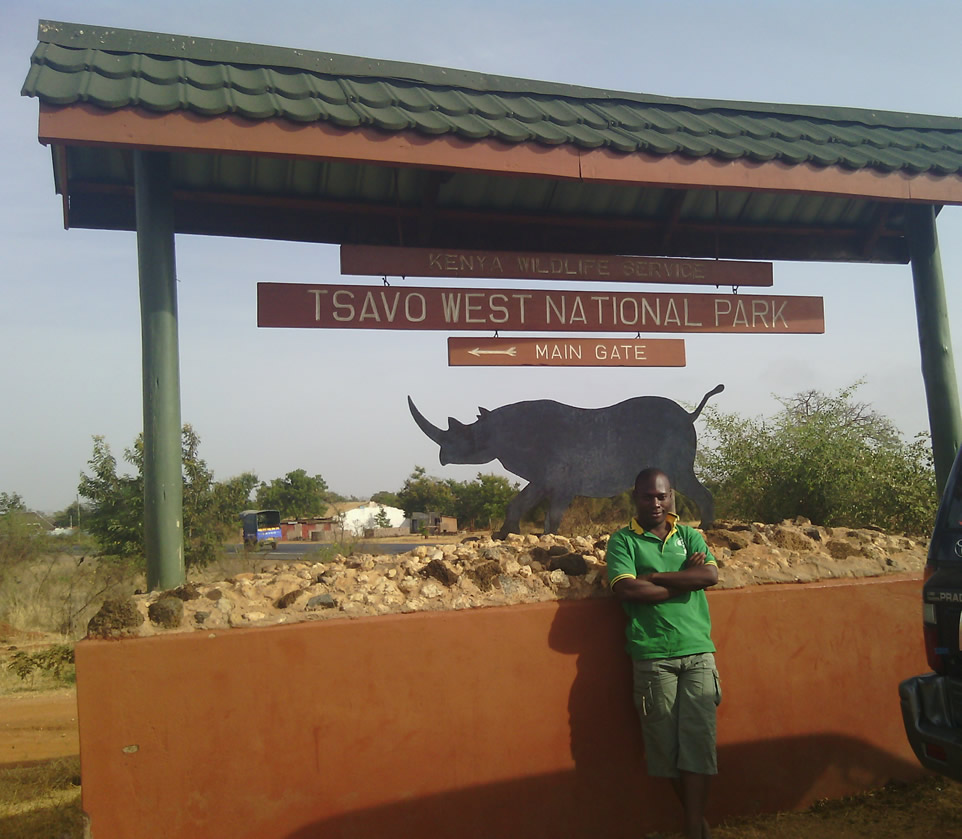 Situated in the southern border with Tanzania exists Tsavo West National Park, one of the most stunning national parks in Kenya that any visitor on African safari shouldn’t miss paying a visit before he or she dies. This park covers an area of 9000 square kilometres and it is no of doubt that it features among the vast conservation areas not only in magical Kenya but Africa at large. The protected area is located 200 kilometres southwest of Nairobi, 188 kilometres west of Mombasa.

The Tsavo West and East National Parks first featured as a one-block national park prior to separating into two parks. The two national parks are divided only by the Mombasa or Nairobi road from the Tsavo East, Tsavo West make up the mighty Tsavo eco-system. The Tsavo West is renowned for its red-skinned elephants and legend of the man-eaters of Tsavo. Tsavo’s lions proved to be notorious around 1898 at the time when Mombasa-Nairobi railway was built a latter that slowed down the whole construction exercise.

While Tsavo West National Park is credited for its huge number of wildlife species, its big size and concentration of vegetation, game safaris in it are very challenging and this makes it not very popular compared to the Maasai Mara National Reserve and Amboseli National Park. 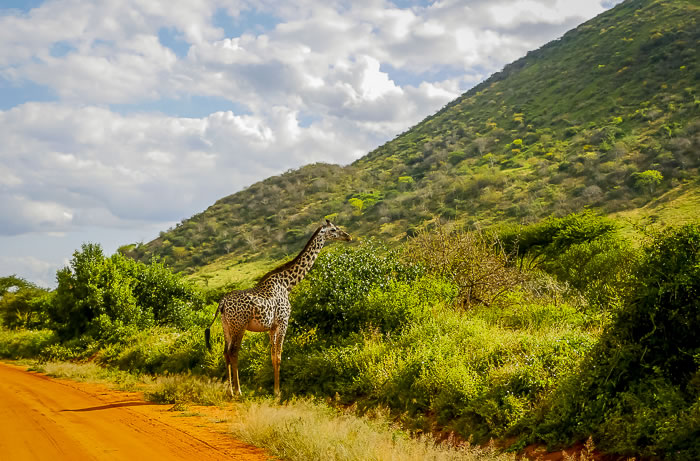 This park, however, is credited for its most exceptional landscapes in East Africa which feature several volcanic craters and scenic hills like Chyulu. The water from these hills flows from beneath the Lava ridge and makes up most of the natural pools in the area. These incredible water pools attract most of the bird species and African wildlife species especially the hunter’s hartebeest, black rhinoceros, cosen’s gerbil, enormous shrew species and rat, wild dogs and Grevy’s zebra.

Tsavo West Conservancy Area as well features the stunning Mzima springs, the unique underwater hippo observatory and for the shaitani Lava flow–the largest compared to the rest of the lava that flow through the park. Travellers can as well take a walk to most of the park’s Lava caves. These caves acted as traps for most species that fell inside to look for water including predators which could follow them. There is chaimu volcanic crater and provides visitors a chance to discover it while on hiking/nature safaris. While on its summit, you will be amazed by the scenic views area.

Over 600 bird species thrive within Tsavo West National Park making it one of the significant birding areas in magical Kenya. The notable birds for you to sight at this park include African skimmers, goshawks, buffalo weavers, palm nut vultures, red and yellow bishops and others. In the swampy areas, you will find the Lake Jipe and the acacia woodlands that inhabit mainly ostriches, kingfishers, secretary birds, herons, hornbills, weavers, starlings, buzzards, kestrels and others Birding safaris at this park are best during the month of October and January.

Tsavo West National Park is credited for its vast ecosystem that features a variety of habitats ranging from water bodies-Rivers and Lakes, mountains, forests, plains to wooded grasslands. These varied habitats feature a number of floral and faunal species and the notable wildlife species for one to spot out include cheetahs, buffalos, rhinos, elephants, impalas, giraffes, zebras, lions, leopards, plain game, crocodiles and many more. 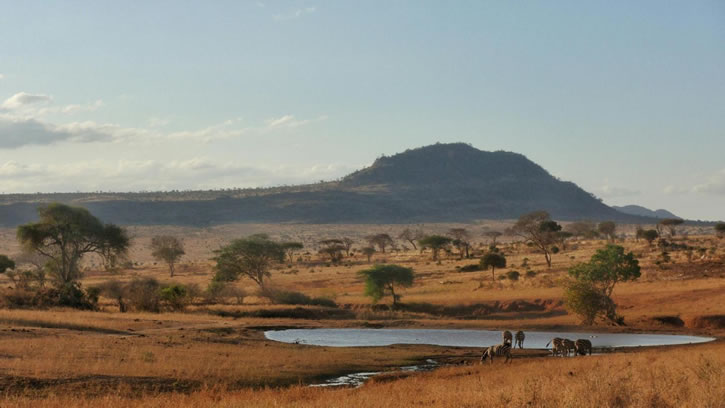 The cliff faces in Tsavo west rewards visitors with the most breathtaking rock climbing adventures in Kenya. The views over the savanna plains are stunning and Mount Kilimanjaro can also be sighted while on safari in this protected area. You can pay a visit up to 300 meters high, east of Kichwa Tembo, the mighty Tsavo chimney and the ivory tower on elephant rock.

Around May, 1948 Tsavo National Park was separated leading to the formation of east and west protected areas. The park derived its name from River Tsavo that overflows from West to East and it is popular as one of the diverse conservation area in the world.

It is the only Kenyan protected area which allows night drives as well as off-road driving and you will certainly have a close encounter with its remarkable biodiversity. As you head to the southern side of Tsavo West National Park, you will find Lumo community wildlife sanctuary directly bordering the famous Taita hills game sanctuary. Lumo community wildlife sanctuary covers an area of about 500 square kilometres. LUMO is an association of the Lualenyi Mramba and Ossa ranches whose communities have collaborated to boost wildlife tourism. And when you are at Taita hills game sanctuary, visitors can spend a night at Lion’s Bluff Lodge. The two stunning wildlife sanctuaries feature spectacular species like elephants, buffaloes, giraffe, variety of antelope families and gazelle. If you are keen enough you will also catch a glimpse of melanistic serval and aardwolves and 400 bird species.

Whereas Tsavo West National Park is described as an all year round travel destination, most visitors prefer travelling to this park from January to February and from November to September. The temperature at this park ranges from 20 to 30 degrees Celsius and between March and April, the area experiences its long wet season and short rains start between November and December. For visitors who may prefer travelling to the park during this time note that the routes and habitat can be muddy and slippery and you are encouraged to use a 4×4 safari car. 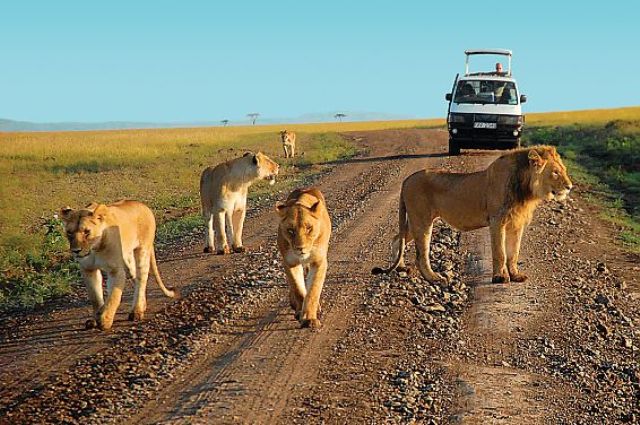 Getting to Tsavo West National Park

Tsavo West National Park can be reached by road and by air. By Air, chartered flights can be arranged in Kenya to Satao airstrip, Ithumba airstrip, Kilaguni airstrip then you connect to Mtito Andei, Jipe, Maktau, Ziwani, Kasigau, Tsavo and Chyulu gate. By road, Tsavo West National Park is accessible from Amboseli National Park, approximately 52 kilometres to Chyulu gate. From Nairobi 272 kilometres then you connect to the Mtito Andei gate. From Mombasa about 188 kilometres where you will use either the Tsavo gate which is close to Manyani or the Mtito Andei gate. Other entrances include the Ziwani, Jipe and Maktau. However note, a strong 4×4 vehicle is highly recommended such as Land cruisers, Land rover and Nissan Safari or Patrol. Contact 4×4 Self Drive Kenya for all Kenya car rental needs.

The prominent safari lodges for your overnight stay at this park include the luxurious Finch Hatton’s Camp, Sarova Salt Lick Game Lodge, Voyager Ziwani Safari Camp and Kilaguni Serena Safari Lodge. Moderate facilities include Kilaguni Serena lodge, Ngulia Lodge and Severin Safari Camp and the campsites include Lake Jipe and Kamboya, Royal Little, Kudud, Simba and Kenge. You can also spend a night at the Bandas in Lake Jipe, Ngulia and Kitani.

In conclusion, Tsavo West National Park features among the largest protected areas in Kenya that offer a wide range of wildlife and other attractions that are all worth exploring while you are on safari in Kenya.