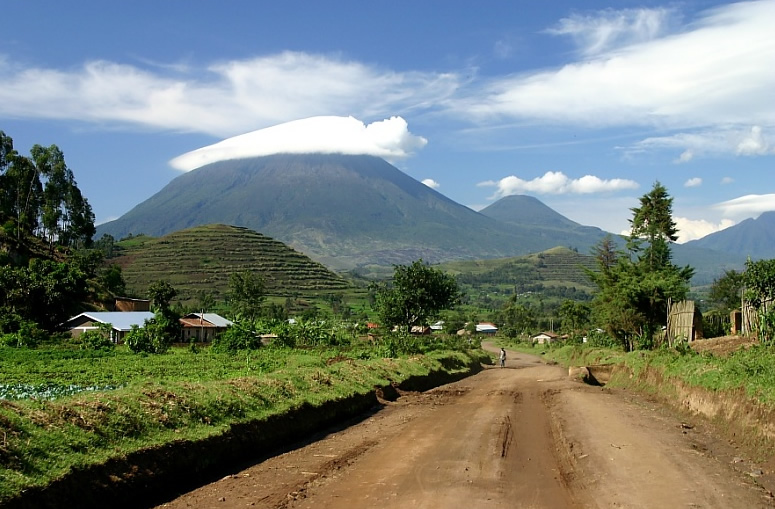 Mgahinga gorilla national park is the smallest national park in the 3 parks found in the virunga region and protects the Ugandan part of the Virunga Mountains. It is found in the south western direction of Uganda in kisoro district mgahinga gorilla national park’s size is 33.7 sq.km and was formed in the 1991 and it covers three of the virunga mountains namely Mount. Muhavura, Mount Gahinga and mount Sabinyo. This park was named form a word called Gahinga which means pile of volcanic lava stone heaps where cultivation is carried out. This park was formed mainly to protect the endangered mountain gorillas, although the golden monkeys have made it their habitat.

Mgahinga gorilla’s national park is stunning place and it offers an unforgettable experience to travelers especially the hiking lovers because it gives travelers a chance to hike to the top of some of the three volcanic mountain found in this park. And Gahinga Mountain has a beautiful swamp at the top and muhavura has a crater lake, Sabinyo Mountain gives travelers the best and amazing experience ever whereby climbing to its summit, the travelers set a foot in three countries accompanied with great scenic views of vegetation.

The park accommodates 39 mammals of these including the mountain gorilla, buffaloes and elephants and golden monkeys, giant forest hogs, bushbucks, leopards, spotted hyenas. Black fronted duikers and many others. The park shelters around 79 bird species.

Mgahinga gorilla national park has one group that is tracked which is nyakagezi gorilla group. This group was known of moving from country to country until it stop and settled in Mgahinga national park. Therefore if you want to track this group of gorillas book in advance a gorilla safari in Uganda.

The volcanoes national park lies along the virunga region, with eight classical volcanoes, which are split by three countries. It is a two hour drive from the capital of Kigali to volcanoes national park and this park is the only option to trek gorillas in Rwanda. The dramatic landscape of the park offers a thrilling hiking experience to the travelers. In Rwanda golden monkeys are only found in this place. Additionally, Volcanoes National Park offers gorilla habituation experience where the tourists spend more time (about 4 hours) with the mountain gorillas in the Jungle.

A number of non profit organizations base their operations in the volcanoes national park making this park the Rwanda’s conservation epicenters. The legendary scientist and gorilla advocate Dian Fossey’s grave is found in this park, there a visit to this park will give travelers a chance to hike to her tombs.

The bustling and vibrant markets of musanze are a place to immerse yourself into everyday Rwandan culture and also go deep into the earth with musanze’s caves. This national park is the best place for travelers to visit on a Rwandan adventure.

It was formed in 1925 as the Africa’s national park and also is a UNESCO since the 1979. The civil war and poaching have damaged this wildlife population in the recent years. This park was formed mainly to protect the mountain gorillas but afterwards it was expanded north to include Lake Edward and the Rwenzori mountains in the far north.

During the first thirty five years, poaching was kept to a minimum and sustained tourism thrived due to the work of the large body of handpicked Congolese rangers and dedicated wardens. Land payment and the use of the park resources such as fishing and hunting by the local population, became an ever increasing problem.

Over the 25 years that followed, the park staff endured an almost uninterrupted series of trials that included a refugee crisis from the 1994 Rwandan genocide, which contributed to the severe destruction of the Park Forest and the proliferation of armed militias throughout the park. The Kivu war, the most recent of Congo’s conflicts centered exactly on the park with rebel’s force occupying the park headquarters and evicting the park’s staff.

Political situation in the DRC has changed exponentially since then. Virunga Park is back in the hands of the ICCN and enjoying the greatest resurgence of tourism and development in its history. International donors are investing in the development of the park’s infrastructure at unprecedented levels. Virunga management is efficient and transparent and morale among the rangers is at an all-time high.