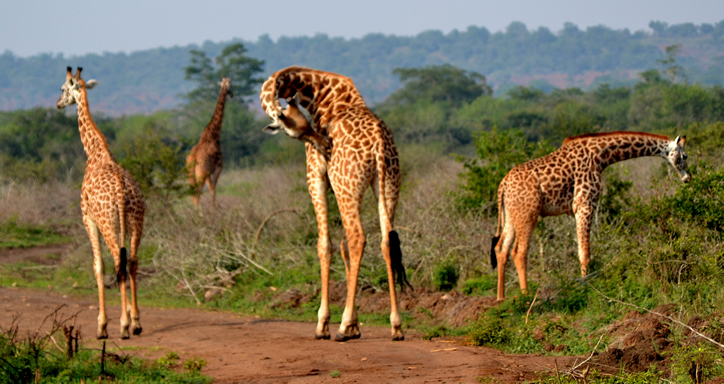 If you are interested in exploring more about the big five game while on a tour in Rwanda, then the only option is for you to pay a visit to Akagera National Park. This park was established in 1934 and this makes it one of the oldest national parks in Africa. It was largely established to offer refuge to most of wildlife species and its splendid vegetation types that include the savanna, mountain and swamp.

It was named after the Kagera River that flows along its Eastern boundary feeding into numerous Lakes including Lake Ihema the largest Lake in the country. The complex system of Lakes and linking papyrus swamps form about a third of the national park making it one of the biggest conservation wetland areas in Central Africa covering around 1120 square kilometers. Since 2010, Akagera National Park has been under a joint management of the Rwanda Development Board and African Parks.

Whereas Akagera is not as popular as other national parks in Rwanda, its exceptionally magnificent makes it one of the best sites for visitors on safari holiday in Rwanda. It is big and the landscape alternates as one move from the North to South. Enclosed by the incredibly the most stunning rolling hills, offering the most spectacular viewing spots as well as the best background for photo taking. Akagera National Park is found on the border of Tanzania at a relatively low altitude and is creatively carved with a labyrinth of swamps which flows into the Akagera River.

Akagera National Park is situated in the Eastern province of Rwanda approximately 2 (two) hours from Kigali city. The park inhabits several wildlife species especially elephants, buffaloes, Zebras, Giraffe, eleven antelope families the lion and leopards. Its vegetation is primarily composed of a low landscape with mainly broad plains which are covered with grass, shrubs of Euphorbia candelabra just like those of the cactus and patches of forests. Compared to the rest of the parts in Rwanda, Akagera terrain isn’t all that mountainous and rocky. Previously, it occupied an area of 2500 square kilometers but in 1997, its size drastically diminished to about 50% as result of resettling the Rwanda Genocide refugees 1994. This came with negative impacts including poaching and cultivation on the park land. Thereafter, the Rwandan government had to reduce its size to nearly half of its original size.

Activities to be done in Akagera National Park

A boat safari is another incredible activity not to be missed out on a safari to Akagera National Park. This thrilling experience is conducted in the morning, day and sunset. A boat tour leads visitors towards hundreds of hippos and crocodiles. A boat cruise offers you the opportunity to view more other wildlife like buffaloes and elephants that tend to collect themselves on the water banks. For bird enthusiasts, you also have a chance to sight amazing birds like fish eagles, shoebill stork, papyrus gonolek, heron, kingfisher and many more.

For bird lovers, this park is undeniably a birder’s paradise. It offers refuge to over 500 bird species including the most threatened papyrus gonolek that are only restricted to the papyrus swamps and others like the gorgeous lilac breasted roller, black headed gonolek, Heuglin’s robin chat, Grey horn bill, Red faced barbet, Swamp flycatcher, Ross’s Turaco. Akagera National Park is known to be one of the perfect birding spots in the world with the biggest bird species per unit area.

Besides, you can as well challenge yourself with sport fishing around Lake Shakani. Hippos stay in the water during the day and the banks of the shore are gently sloped meaning that a visitor is able to sight any crocodiles that may want to approach him or her.

Wildlife safaris in Rwanda are by far better when combined with local community encounters. While on a tour in Akagera National Park, make sure that you don’t miss visiting one of the adjacent communities for amazing local experiences where you will engage in some of cultural and traditional practices like heritage or the culture of cattle in Rwanda, local production-the process of making a local brew, arts and crafts and food and festivities. Any of the above safaris provide opportunity to visitors to realize the real life in local communities around this protected area. You can also participate in milking a cow or rather sample honey on the comb, engage in food preparation or participate in traditional Rwandan music and dance. While on your cultural safari in local community, you will spend about 3 hours.

For visitors who are planning to go for a safari to this park, remember to include the following items into your packing list; light colored clothing, long pants and a long sleeved shirt/T-shirt, get an insect repellent and many more.

Where to stay in Akagera National Park

The notable lodges for you to spend a night over at the park include the Karenge Bush Camp, Akagera Game Lodge, Ruzizi Tented Lodge and the other option is Camping.

From the discussion above, Akagera National Park is undeniably the perfect gateways for visitors to embark on faster day tours while in Rwanda. It is perfect to explore its unique wildlife species while on game drive and boat cruise.