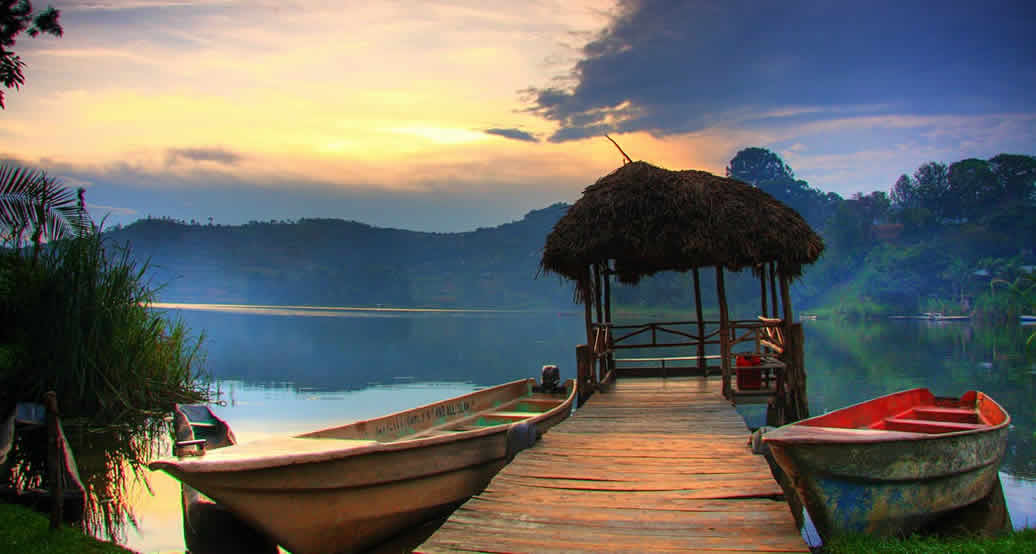 Lake Bunyonyi “Place of many little birds” is found in the southwestern part of Uganda between Kisoro, and kabala and it’s found close to the Ugandan border with Rwanda. from 2005 to 2009 Lake Bunyonyi appeared on the 5000 Ugandan shillings note under the “Lake Bunyonyi and terraces” scientific literature generally quote that, the lake has a maximum depth of 40m (130ft) but some tour guides and local people had it that it’s much deeper about 900m (3000ft) which would make it the second deepest lake in Africa.

Lake Bunyonyi is the main water body in Kabala found something like 8km west of Kabale town. On its shores, there are two small towns that are, Kyevu and Muko and also the lake has 29 islands which include; punishment island, Bushara Island, and others.

The main and most famous island on this lake is the Punishment Island, which is locally known as the “Akampene” in Rukiga Language. This island is mainly known for being the place where the Bakiga people used to leave the unmarried pregnant girls to die of hunger or die while trying to swim to the mainland because their swimming skills were rare. This was to intimidate the rest and show them not to do the same. More to this, some men who didn’t have cows to pay the bride price to get a girl to marry, could go to this island and pick up a girl and marry that one for free. This practice was later abandoned in the first half of the 20th century. 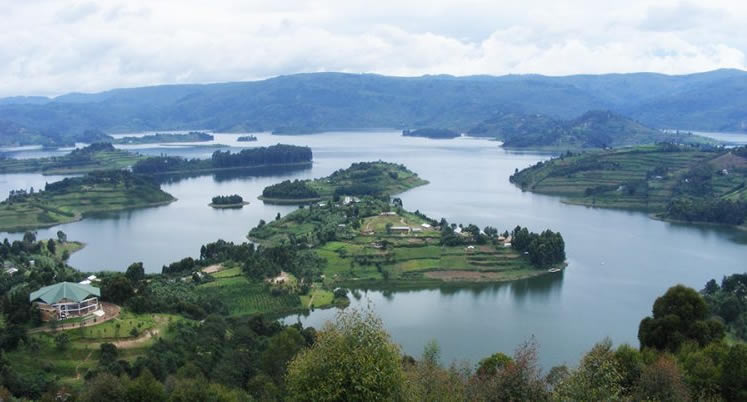 Among the other islands, you can found at Lake Bunyonyi is the Bwama Isnald, and Njuyeera Island or “Sharp’s Island” these two islands also have a very interesting historical background. This is where an English Missionary called Leonard Sharp who came to this part of Uganda in 1931 and established a leprosy treatment center, a church patient quarters “model village” a medical facility where built, while sharp settled on Nyuyeera Island, probably meaning “white cottages after the similarity of the doctor’s small white house to Sharp’s father’s house in Shanklin now the “White House Hotel”. The rationale of the leprosy colony was that of “voluntary segregation” where the provision of the happy community to live in would attract leprosy sufferers, so removing them from the communities where they might infect others.

Expect for water birds, few aquatic animal species are naturally present in these isolated island lakes which are near but not quite connected to the greater Nile basin its water is highly stratified with the oxygen limit placed at a depth of about 7m (25ft). Originally there were no fish in the lake but the catfish, Nile tilapia, singida tilapia, and red swamp Crayfish have been introduced.

About tourism, Lake Bunyonyi is popular for its green and terraced hills that are punctuated with a plethora of over 200 different species of bird. The place combines the art of water birds and some migratory birds, and this makes it a perfect ideal place and tour destination for many bird lovers.

Apart from bird watching, there is a variety of different activities you can enjoy when you visit this place which includes; sports fishing, Lake swimming, canoe ride, and boat cruising.

The lake is also underlined by various hikes and nature walks all of which offer more than just nature and pleasure. 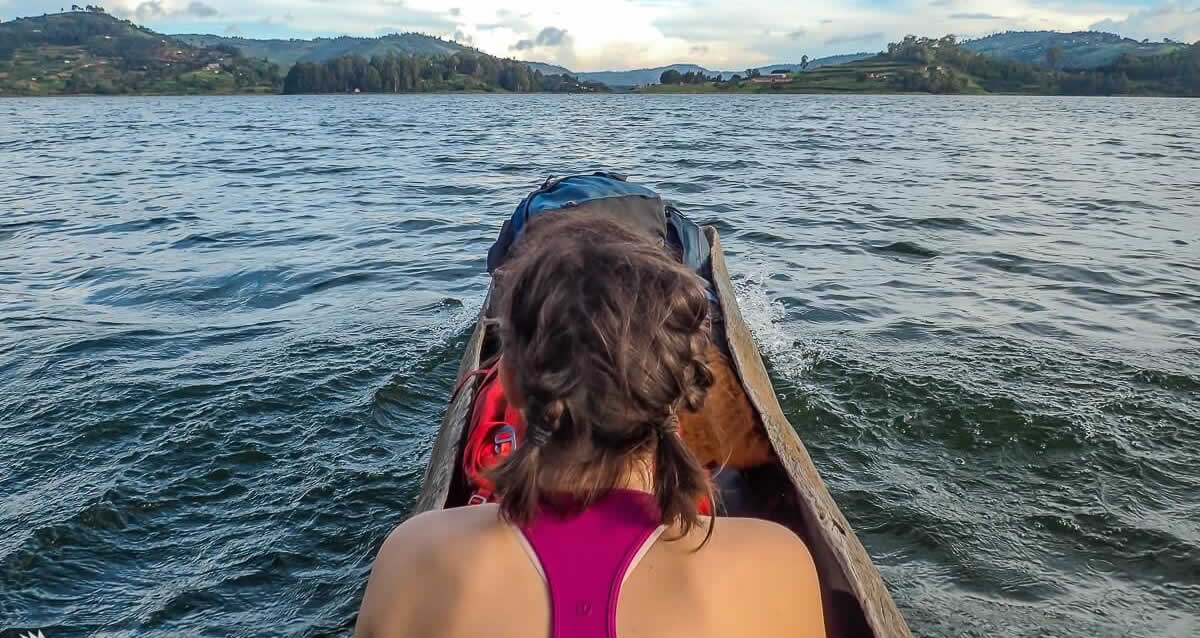 A sense of traditional culture is also felt during the community nature walks since one can get a stopover at the “Bakiga cultural museum” as well as the blacksmith site for a more cultural experience one can also visit the village of Bafuko for “Batwa” and “Bakiga” experience.

Lake Bunyonyi is a destination bewilderingly absent on every buzz feed and mashable “place to visit before you die”. This place deserves to be on every travelers’ “African travel radar” because of its beauty and scenery which are amazing. The lake is also known as one of the few lakes in the country free of bilharzia a common parasite found in southern Africa making its waters safer for swimming.

The lake is also free from dangerous water animals like crocodiles and hippos. The only warning for visitors is the depth which implies that inexperienced swimmers should take caution.

One of the tours sold to tourists is the visit to the Batwa tribe of pygmies where you have to make an informed decision when accepting such a tour as some feel they are exploitative. The Batwa in this region is one of the original inhabitants of the country who were dispossessed of their ancestral lands by the government to build the Echuya Forest Reserve with tragic consequences. To survive, they invite tourists to their community where they perform songs and dances and they are paid for entertaining the tourists.

If you hire a local tour guide to lead along with the best hiking trails on the islands or through the terraces around Lake Bunyonyi, it will be rewarded with spectacular views of the landscapes and even some wildlife. Forest and different tree populations can be found on some of the islands as well as monkeys and zebras, otters can also be spotted in the waters.

Lake Bunyonyi is known as “the place of little birds” it harbors over 200 species of birds including herons, weaver birds, and grey crowned cranes. The lake is a popular tourist destination for both foreign and domestic tourists because there is a wide variety of tourist activities and accommodation for both luxury and budget travelers. 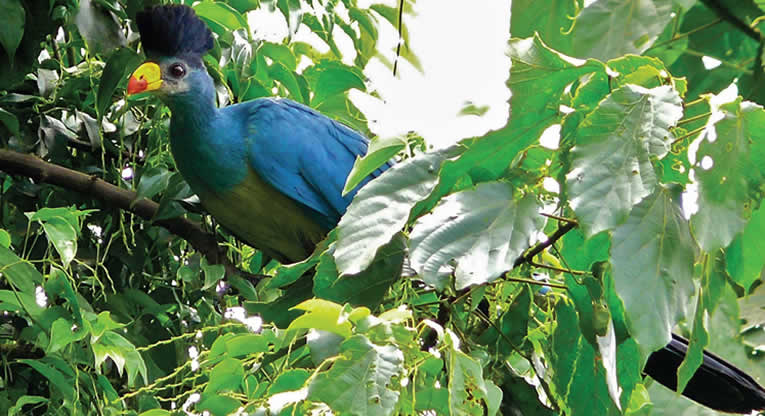 Most tourists who go for gorilla trekking in Uganda and those crossing to Uganda after their Gorilla trekking experience in Rwanda, rest and relax at the beautiful Lake Bunyonyi as they enjoy the best scenery and landscape, take part in cultural and community activities as well as birding, and canoe ride.

Lake Bunyonyi can be reached independently, you first have to make your way to Kabale Town found around 410km from Kampala the Uganda capital city. You can take about an 8hour drive on a bus from Kampala and then continue from Kabale to Lake Bunyonyi it’s about 8km from Kabale town. Given its proximity to Rwanda, you may want to consider accessing the lake from Kigali or vise versa which is only a 2hour drive by car. In case you will have to buy your visa at the border, add another 30minutes to 1hour to your journey putting in mind that weekends are busier.

Lake Bunyonyi is one of the most idyllic natural settings in Africa, and I would contend the world has to after, in fact, I almost feel like am spoiling the serenity of this enchanting, underrated hideaway by sharing this information but “of course” beauty is meant to be shared and praised “isn’t it”.

Given what you have read above, would you visit, “LAKE BUNYONYI”?

Things To Do, Uganda, Uganda Attractions