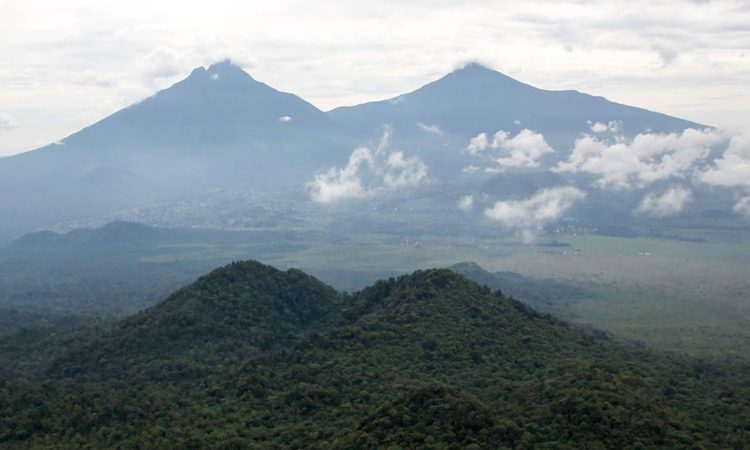 Mountain Mikeno is the 2nd highest mount in Democratic Republic of Congo and the 13th highest in Africa. It is found in the Virunga National Park in the southern sector. This park is Africa’s largest and oldest conservation area which spans 7800 km2, lying across borders with Uganda (Mgahinga National Park) and Rwanda (Volcanoes National Park).

Mount Mikeno is part of the Virunga Mountains, a massif that consists of 8 volcanoes of which 7 are within the Virunga national park boundaries. However Mikeno is only visible from inside the Democratic Republic of Congo. Of the 8 Virunga Mountain, only 3 are active and the rest are dormant and some of the prominent volcanoes of this range include Mount Bisoke, Nyamuragira and Nyiragongo.

Mikeno means poor and it was named so because its slopes are not favourable settlement areas for humans. Mount Mikeno is one of the Virunga volcanoes that had not been climbed for over 28 years until August 2011 when a team of 3 young enthusiastic men decided to concur its peaks; these included, Lewis Mudge, Cai Tjeenk Willink and Pierre Peron.

Mountain Mikeno stands at a height of 4,437 meters and is the second-highest peak in the Virunga Mountains after Karisimbi and the slopes of this mountain harbors the most endangered giant mountain gorillas and the voyage to observe Mikeno’s gorillas typically leave from the nearby Bukima patrol post.

Some of the interesting activities is hiking and the hike a top mount Mikeno takes 5-6 hours to reach its summit and along the way it’s really amazing because travellers can easily take a tour around coffee plantations, guided walks to water-falls and nearby villages. Some travelers visit this mountain with only supposes of trekking gorillas and chimpanzee but they end up being attracted by this adventure.

Mount Mikeno, together with Mt. Sabyinyo are the oldest volcanoes with in the Virunga ranges, dating back 30 million years from the early part of the Pleistocene epoch, and its craters disappeared and the erosion has imposed a jagged relief.

For climbers, there are endless chances for sighting waterfalls and coffee plantations in the mount flanks. Other options for visitors include guided tours to the native communities. Hiking gear is available at Mikeno Lodge as well as various required permits.

Bukima Patrol Post: This is the most famous post where most gorilla trekking tours in Mikeno sector depart from.

Kabara camp: This is the first campsite which takes about 4 hours to reach. It is also the burial place of Carl Akeley who died of fever while summiting this mountain in 1926. However, the actual grave is in now pieces and is believed to have been desecrated by either Congolese or Rwandese rebels while searching for gold assumed to have been buried with this nature photographer and conservationist. This is also approximately the highest that most hikers go.

Campsite 2: This nameless campsite is a tough climb from Kabara as it is a 60° incline upwards for the latter half, but the campsite has incredible views of the mountain and surrounding features. Climb further for about 4 hours on a typically vertical terrain to concur the summit of Mount Mikeno that very few have reached.

The Journey to Mountain Mikeno is only 1 hour drive from Goma town North of Lake Kivu, there are lbig bungalows, and mikeno lodge within the forest with comfort and breathtaking views of the forest hence there’s not much to do than relaxing, and enjoying sceneries and the slopes of mountain Mikeno are habitats to a natural alpine forest which provides shelter to a variety of wildlife such as chimpanzees and other primates such as blue and colobus monkeys, baboons and birds. Apart from hiking, visits to the forests and local villages can be arranged.